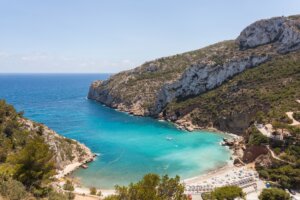 The Times has included one of Alicante’s picture-postcard beaches among its Spanish top-10. Noting that “Spain’s sultry beaches have been beguiling holidaymakers for decades”, the newspaper’s travel team named 10 of their favourites, including Platja de Cala Granadella on the Costa Blanca.

Located in a small cove on the edge of Xàbia (the official Valencian name for Jávea in “castellano”), the beach is ideal for those wanting to avoid Alicante’s more popular seaside areas but still be dazzled by the Mediterranean resort’s rocky cliffs, white sands and turquoise waters.

The other Spanish beaches included in the The Times’ top-10 are: