Motorcycling enthusiasts who would like to combine sport with tourism are invited to sign up for this year’s fourth edition of the Costa Blanca Challenge. Due to be held on 14 and 15 October, the event is a non-competitive ride through historical, cultural and natural areas in Alicante province, with money also raised for charity.

It starts and ends in Alcoy, which is located 65 kilometres by road north of Alicante-Elche Miguel Hernández Airport, and inland (north-east) from Benidorm. Full details about the itinerary are still to be confirmed, but those taking part can opt for one of two routes: 300 or 500 kilometres. The cost is €75 for riders and €70 for passengers, and registration is open at CostaBlancaChallenge.com until 31 July. 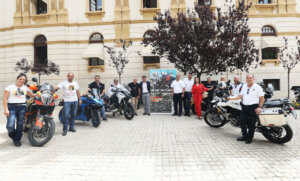 The 2022 event was unveiled during an official presentation by the provincial government (Diputación de Alicante), whose president Carlos Mazón noted that the objective was to connect, enhance and highlight the province’s inland landscapes and natural assets.

“Inland tourism has been consolidated in our province as a quality product,” he said, “not only due to the natural environment but also thanks to our road maintenance.” To that end, the Plan Catí project was set up to revitalise and boost Alicante’s options, focusing on gastronomy, restaurants, rural accommodation and the capacity to organise such high-profile events as the Costa Blanca Challenge.

Event organiser Luis Miguel Verdú said more than 300 motorcyclists were expected to take part in the event, and have the opportunity of “discovering a province that is not only sun and beach but also home to many hidden inland secrets”.

According to Indira Amaya, president of the Alicante Province Inland Tourism Association, one of the most effective ways to showcase Alicante’s diverse natural surroundings is by creating motorcycle routes and tourist products such as touring, “which provide a pole of attraction at the same level as other European benchmarks such as the Alps and the Pyrenees… Here we have natural landscapes, mountains and roads that are so well maintained that they are becoming especially popular among foreign visitors who are keen to enjoy this type of tourism, one that is committed to sustainability and rural development and which allows us to seek synergies with small producers and family businesses.”