It might not necessarily be to everyone’s viewing taste but Netflix TV survival drama series “Squid Game” has certainly become a global viral sensation. Even 10,000 kilometres from South Korea in a tranquil coastal resort in Alicante province.

Various media around the world have drawn attention to similarities between Squid Game’s dystopian sets and the La Muralla Roja (The Red Wall) urbanisation in La Manzanera on the Costa Blanca coast near Calpe.

Considered one of renowned Spanish architect Ricardo Bofill’s most iconic works, the post-modern apartment complex was inaugurated in 1973 as an avant-garde re-interpretation of northern African kasbahs.

Even though it remains essentially a housing estate, La Muralla Roja has also become widely recognised as a tourist attraction, and apartments can be rented for overnight stays.

As for its comparisons with Squid Game, fans contemplating a visit will find a maze of vibrantly-coloured, puzzle-like staircases that resemble an optical illusion, and a fortress-style overall structure encompassing walls, courtyards and connecting bridges. 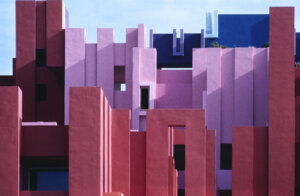 So what exactly is the concept behind La Muralla Roja, apart from this uncanny design link with Squid Game? Over to the architecture studio (RBTA) for a professional explanation…

“La Muralla Roja embodies a clear reference to the popular architecture of the Arab Mediterranean, in particular to the adobe towers of northern Africa. The Red Wall is like a fortress which marks a vertical silhouette following the contour lines of the rocky cliff.

“With this building, RBTA wanted to break the post-Renaissance division between public and private spaces, reinterpreting the Mediterranean tradition of the kasbah. The labyrinth of this recreated kasbah corresponds to a precise geometric plan based on the typology of the Greek cross with arms five metres long, these being grouped in different ways, with service towers at their point of intersection. The geometric basis of the layout is also an approximation to the theories of constructivism, and makes La Muralla Roja a very clear evocation of these. 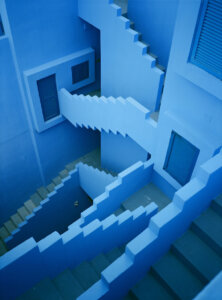 “The forms of the building, evoking a constructivist aesthetic, create an ensemble of interconnected patios which provide access to the 50 apartments… The criterion of applying to the building a gamut of various colours responds to the intention to give a determined relief to the distinct architectural elements, according to their structural functions.

“The outside surfaces are painted in various tones of red, to accentuate the contrast with the landscape. Patios and stairs, however, are treated with blue tones, such as sky-blue, indigo and violet, to produce a stronger or weaker contrast with the sky or, on the contrary, an optical effect of blending in with it. The intensity of the colours is also related to the light and shows how the combination of these elements can help create a greater illusion of space.”

Alicante-Elche Miguel Hernández Airport is a convenient 75 kilometres by road from La Muralla Roja, with excellent deals available for visitors wanting to rent a car. 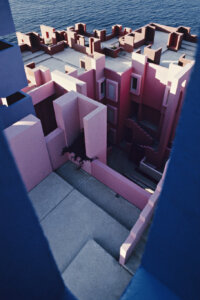