The exotic “Hung Galaxy” exhibition will remain on display in Benidorm until 18 October for tourists visiting the popular resort this month.

Previously displayed in the City of Arts and Sciences in Valencia, the exhibition by Taiwanese artist Hung Yi has been a visually vivid landmark, and talking point, in Benidorm’s central streets since spring. It comprises 14 brightly coloured and intricately detailed sculptures inspired by Taiwan’s culture, everyday life and traditional patterns, and set up in the form of an open-air museum.

Each sculpture weighs approximately 1,000 kilograms and some are more than six metres high. Hung Yi is said to have painted all of them as if they were a comic, influenced by Pablo Picasso, Salvador Dalí and Joan Miró, and associated with symbolic Chinese New Year animals. 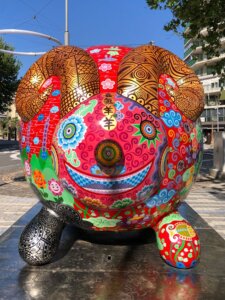 Born in Taiwan in 1970, the self-taught Hung Yi is considered one of the East’s top artists, and in recent years he has become especially prolific in urban art.

In addition to Valencia, the “Hung Galaxy” exhibition has also been displayed in the United States (San Francisco, Washington and New York), Japan (Tokyo) and China (Shanghai). After its stay in Benidorm – where it can be viewed in Plaza de la Hispanidad, Gambo Street, Mediterranean Avenue and Armada Española Avenue (Poniente Beach) – the exhibition will be shown in Paseo del Prado in Madrid.