One of Spain’s premier sports resorts has undertaken an extensive renovation project to consolidate its status as a flagship destination on the Costa Blanca.

Referring to the refurbishment, general manager Brendan Dwyer said, “Our focus as a management team was to create a modern and exciting golf resort that offers the best cuisine in the region, to be enjoyed by golfers and visitors alike.

“The recent redevelopment work that we have carried out has taken an already fantastic venue and elevated it to the next level, but the hard work doesn’t end here. We are a highly ambitious and driven team and we are committed to growing La Finca Resort’s stature as the very best destination in the region.”

The latest development work included a revamp of the five-star hotel and the opening of Jardines La Finca Restaurant, serving “Mediterranean cuisine with a touch of designer style”. Two new restaurants and a winery are also scheduled to open later this year –  Frijolino, a Mexican-Italian hybrid establishment Misto Grillhouse – with the Bodega La Finca winery due to be launched in autumn. 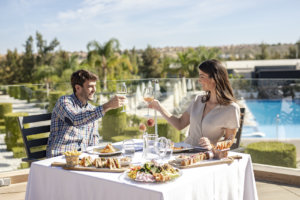 Opened in 1972, Villamartín hosted the European Tour’s Mediterranean Open in 1994, while Las Ramblas was inaugurated in 1991 and La Finca the following year.

The hotel includes 120 guest rooms, an outdoor swimming pool, a conservatory next to the garden with space for 350 people, and a first-class racquet area with both tennis and pádel courts. Its facilities also include a newly-renovated spa (with gym, water circuits, and massage and treatment rooms), and several cocktail bars and cafeterías.

“We are on a continuous journey to enhance our offering at La Finca Resort,” said Dwyer, “and put the venue on the map as the very best golf resort and pinnacle of golfing tourism on the Costa Blanca. We are extremely proud of what has been achieved at the resort to date and we will continue to build on that success in 2020 and beyond.”