With British and other international tourists once again able to enjoy summer holidays on the Costa Blanca, Alicante-Elche Airport has been upgrading its restaurant options and digital services. Two new outlets have opened at the airport to cater for the increased traffic, Subway and La Tagliatella, and Aena and Telefónica have launched an app to help passengers make their way around the terminal.

Extending over 200 square metres, the Subway outlet is the company’s first in Europe to incorporate self-service “kiosks”. These dispensing machines enable clients to select, pay and collect their purchases in a specially designated area, thus reducing waiting times and providing a more convenient and comfortable view of the foodstuffs available, including sandwiches and rolls, salads, desserts and other snacks.

The airport’s culinary options have been further enhanced this summer with the opening of the new La Tagliatella Espresso restaurant and the launch of a renovated Starbucks outlet – all managed by the Areas operator.

Covering an area of more than 400 square metres, La Tagliatella Espresso adapts the traditional concept of quality Italian cuisine to the specific requirements of an airport environment, while the Starbucks cafetería has been redesigned to offer a more modern ambience in tune with the airport’s updated commercial focus.

According to Aena, after a year during which the newly-renamed Alicante-Elche Miguel Hernández Airport has been forced to reorganise its facilities to adapt to lower levels of traffic caused by the COVID-19 pandemic, new spaces are beginning to open and commercial premises are being renewed. 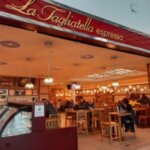 The airport offers passengers a Costa Coffee cafeteria (managed by Airfoods) on the departure pavement and a Delikia (Areas) restaurant outlet in the arrivals area, as well as Burger King (Select Service Partner), EAT (Ibersol), Enrique Tomás and the aforementioned La Tagliatella, Starbucks and Subway in the boarding area.

Meanwhile, passengers looking for somewhere to eat or have a drink can now take advantage of an upgraded app launched by Aena in conjunction with Telefónica.

The digital tool provides a location map and guide to specific points around the airport, including the boarding gates, shops, restaurants and toilets, and allows users to calculate the travel time or distance.

In addition, it offers a service for passengers with reduced mobility, thus complying with airport accessibility requirements, and provides other important information such as the current real time for passing through security.

Over the next few months, the app will be integrated with other localisation tools for the airport’s outside areas, including the possibility of saving details of a parking space and sharing that position with other people.

The Aena app can be downloaded on both Android and iOS, and it indicates the selected routes both visually and by voice.