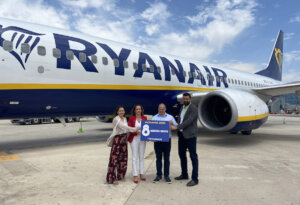 Flights between the Costa Blanca and Belfast, Teesside, Venecia Treviso and Bari have been included on Ryanair’s updated summer schedule.

During a working meeting with local tourism and airport authorities, the low-cost airline company announced that a total of 70 routes would be operated at Alicante-Elche Airport over summer, including the four new connections.

Following the meeting, Costa Blanca Tourism Board director José Mancebo said, “We would like to thank Ryanair for its commitment to the Alicante airport and to the Costa Blanca in general, a strong commitment motivated by our destination’s capacity to attract tourists from all over Europe, as well as by the airport’s potential area of influence – more than five million passengers.”

He added that confirmation of the 70 routes would strengthen the Costa Blanca’s alliance with both Ryanair and the airport and AENA airport authority, as a key ongoing element of the destination’s ongoing connectivity strategy.

The Ryanair meeting came on the eve of further good news for the local travel industry. The British Foreign, Commonwealth and Development Office announced that it would no longer recommend that British holidaymakers avoid such “amber list” countries as Spain, and the UK government confirmed that, fom 19 July, fully vaccinated UK travellers would not be required to self-isolate when returning home to England from Spain.

As previously reported, the EU and UK are also believed to be nearing an agreement to mutually recognise their respective NHS Digital COVID Pass and EU Digital COVID Certificate.

The new rules for returning UK tourists were announced by transport secretary Grant Shapps in a statement to Parliament. He said they would apply to people 14 days after their final dose of the vaccine, and only vaccines given by the NHS would count.

He said travellers would still have to take a pre-departure test three days before their return flight and a PCR test on or before day two of their return, but no longer be required to take a day-eight test.

“In essence,” said Shapps, “this means that for fully vaccinated travellers the requirements for green and amber list countries are the same.”

Northern Ireland is reportedly planning to adopt the changes from 26 July, while Scotland and Wales are said to be considering their options.