Spain Lifts Testing Requirements for Visitors from the UK

From next Monday (24 May) British travellers will be able to fly into Spain without having to show a negative COVID-19 test result. New protocols, which were published today in the Official State Bulletin, will apply from 00.00 hours on Monday (midnight Sunday), and follow the European Union’s announcement of a similar easing of restrictions for non-essential travel from “third” countries – i.e. outside the EU.

The new situation only applies to countries considered epidemiologically “safe”: Australia, Israel, New Zealand, Rwanda, Singapore, South Korea and Thailand, as well as China (if reciprocated) and Britain and Japan.

Announcing the changes (and details of the EU Digital COVID Certificate, due to be launched on 1 July) at the Fitur tourism fair in Madrid, prime minister Pedro Sánchez said it was “without a doubt great news”. He added that, from 7 June, tourists from countries still without complete free movement – including the United States – could enter Spain provided they have a certificate proving they have had their last recommended dose of a vaccine approved by the European Medicines Agency or World Health Organisation. 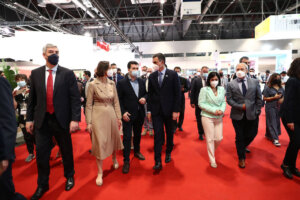 Travellers from the EU will also be free to enter Spain without testing requirements if they are from a country with “green” status in accordance with European Centre for Disease Prevention and Control guidelines. If travelling from “orange” “red” or “dark red” countries, they will still be required to have a PCR test before leaving home or, from 7 June, a completed vaccination dose approved by the EMA or WHO.

Until now, EU countries have been closed to all but essential travel in an effort to control the spread of the pandemic. Under the new European rules, European Union ministers have recommended easing the temporary restrictions from countries where the COVID outbreak is considered to be under control and for people who have been vaccinated against the disease.

The European Council stressed that its recommendations were not a legally binding instrument, and member state authorities remained ultimately responsible for implementing their specific content.

The British government updated its travel advice website to take into account the changes, but also warned, “No changes have been made to the level of our travel advice for any regions of Spain. We continue to advise against all but essential travel to Spain.”

The Commonwealth & Development Office said that, while current entry restrictions and testing requirements for arrivals from the UK to Spain would no longer apply from Monday, “travellers from the UK should be prepared to present evidence of a negative test if they have travelled to a country on Spain’s list of ‘risk countries’ in the 14 days prior to travel. All passengers entering Spain will still be required to complete a pre-travel declaration form. Quarantine and testing on return to the UK continues to apply.”

In anticipation of the new rules, airlines operating at the newly-named Alicante-Elche Miguel Hernández Airport have announced a major boost to their schedules. Click here for up-to-date information.