Spanish prime minister Pedro Sánchez travelled to Alicante this week to inaugurate a key new section of the AVE high-speed rail line from Madrid. Operated by Spanish national railway company Renfe, the AVE (Alta Velocidad Española) network criss-crosses Spain, from the northern coastline to the Mediterranean. It is the longest high-speed rail network in Europe, extending over 3,000 kilometres, with trains reaching speeds of up to 310 km/h.

It is also an increasingly useful complementary transport system for tourists arriving at international hubs such as Alicante-Elche Airport and wanting to visit other major cities during their stays – including Madrid, Barcelona, Valencia, Málaga and Sevilla.

The Madrid–Levante network connects Madrid with the eastern Spanish region of the Mediterranean coast. The Madrid-Cuenca-Valencia line was officially completed in 2010, and the Madrid-Albacete-Alicante line was inaugurated in 2013. Trains cover the distance between Madrid and Alicante in two hours and 12 minutes.

The first stretch of the AVE service from Madrid to Murcia, inaugurated by Sánchez, links Monforte del Cid, Elche and Orihuela (all in Alicante province). Construction of the continuation to Murcia is due to be completed later this year, and work is underway to eventually extend the line to Cartagena. When fully operational the Madrid–Levante (“eastern corridor”) network will cover 955 kilometres of high-speed railtrack.

The 48.4-kilometre stretch between Monforte del Cid, Elche and Orihuela forms part of the 68.6 kilometre connection that will ultimately reach Murcia (with 15 kilometres still to be completed). Fifty-two kilometres are situated in Alicante province and the rest in the neighbouring Murcia region.

This newly-opened line also comes under the framework of the “Mediterranean Corridor”, an ambitious project that is key to a European Union strategy to improve the railway sector’s competitiveness and, in particular, to increase the railway share of goods transport. 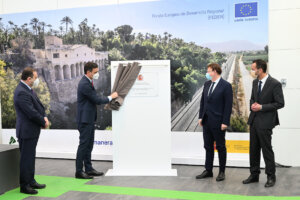 The trans-European corridor (“Rail Freight Corridor 6”) links Spain and Hungary, crossing another four countries (France, Italy, Slovenia and Croatia) all the way to the Hungarian border with Ukraine. It extends for more than 7,000 kilometres from Algeciras in the Strait of Gibraltar (Andalucía) to Záhony in Hungary.

Prime minister Sánchez was accompanied on the trip to Alicante by the president of the Valencia regional government, Ximo Puig, and the national minister for transport, mobility and urban agenda, José Luis Ábalos; as well as local mayors and other dignitaries. 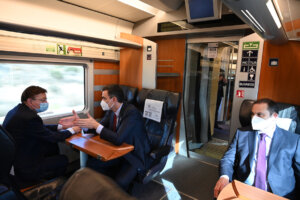 In his speech, Sánchez highlighted the government’s commitment to infrastructure development through projects that enhance the country’s structure, such as the new AVE stretch opened in Alicante. “In terms of territorial cohesion,” he said, “ it will contribute to a strengthening of the regional economy, and Spain’s as a whole, in such important sectors as tourism, industry, agriculture and logistics.”

Click here for more information about transport services when arriving at Alicante-Elche Airport.