Alicante’s town hall has been taking part in a pilot project aimed at providing a more sustainable and pleasant environment for beachgoers, as a new study shows the area has been considerably less affected by COVID-19 than the UK and other countries in Europe.

Spanish “proptech” company Sonneil analysed data compiled by the World Health Organisation and Spanish health ministry, to compare COVID-19 infection rates in such popular tourist destinations as the Costa Blanca (Alicante province) with those in the main countries normally sending tourists to these areas (Britain, Germany, etc.) but which are advising their citizens not to travel to Spain at the moment.

They determined that, while Spain overall might have had a higher rate than the UK when the latter announced that returning British tourists would have to go into quarantine for 14 days, specific Spanish areas had much lower figues. 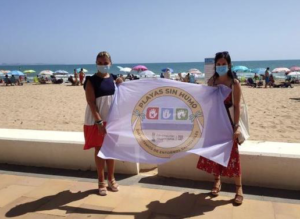 According to the organisers, the initiative’s dual aim was to focus on a combination of care for the natural environment with personal care for individuals’ well-being and that of people in the vicinity.

“We intend to raise awareness about the sustainability of beaches, and look after them by favouring the preservation of the marine environment,” said deputy mayor Mari Carmen Sánchez, who is also president of the tourism board. “It is only a citizen awareness campaign – without any kind of tax collection effort behind it.”

This aspect of the campaign was highlighted by TheMayor.EU portal in a report on the initiative… “What is interesting is that the campaign has transformative aims which seek to gently remind citizens of the need to take care of themselves and the environment without sanctioning them. That means that the local police will not impose fines on people who smoke but will instead recommend to them to do it on the promenades outside of the beaches.

“Changing old habits might not be easy but it would certainly be advantageous in the long term since it has been reported that more than five kilograms of cigarette butts are collected daily from the city beaches. Even more, this is not a simple task as it requires manual work with rakes and sieves because the standard beach cleaning machines are not able to pick such small items.”

Click here for a comprehensive guide to all the main tourist areas – and beaches – of the Costa Blanca.