Alicante’s municipal tourism board has installed NaviLens technology on Tabarca Island with the aim of offering visitors cutting-edge historical and patrimonial information.

Highlighting the island’s architectural history, the new high-tech initiative is a key part of Alicante’s ongoing commitment to sustainability, digitisation and accessibility, and complements the area’s other sun and beach-orientated tourist attractions. Five Alicante beaches have been awarded “Blue Flags” this year, including Tabarca.

With a permanent population of just 50 people, Tabarca is the only inhabited island in the Valencia region, of which Alicante is one of three provinces. The island is located opposite Alicante city, 11 nautical miles offshore and near the Santa Pola headland.

Rather than an island, per se, it is a small archipelago comprising La Cantera, La Galera and La Nao islets, as well as Tabarca Island itself – extending 1,800 metres in length and 400 metres across at its widest point. 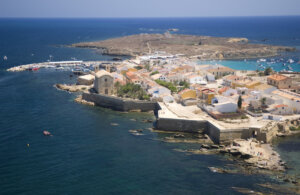 Once a refuge for Berner pirates, the island was fortified by King Carlos III in the 18th century, and a town was built to house several families of Genoese fishermen who were being held as prisoners in the Tunisian city of Tabarka. The walls surrounding the town have been officially declared a “Historical and Artistic Site” and an “Asset of Cultural Interest”.

During the peak season, thousands of tourists visit the island in a single day, prompting the authorities to boost the police presence this year. The Guardia Civil in Alicante has reinforced its summer surveillance on Tabarca, and officers are travelling to the island every day until mid-September to ensure compliance with COVID-19 measures, maintain public safety, and monitor nautical and other leisure activities.

Another new initiative at Tabarca beach this summer is a special accessibility service for people with reduced mobility, while the town hall has also reaffirmed its commitment to protecting the sustainability of the marine reserve’s natural environment.

Back on the mainland, El Postiguet – at the foot of Santa Bárbara castle and located next to the city port and esplanade –  was the first beach in Spain to integrate the NaviLens app, which provides mobile phone users with written or spoken information in 33 languages. Navilens labels were installed at the beach’s 13 entrances to assist users with visual disabilities.