Over the past 20 years, the Museu de les Ciències in Valencia has become consolidated as one of Europe’s premier 21st century science museums. Since its inauguration on 13 November 2000, a total of more than 12 million visitors have viewed its cutting-edge interactive science exhibitions.

For many tourists visiting the region – which includes Alicante province to the south – the museum has become a must-visit date on their travel agendas.

According to the museum, its main aim is to help visitors become more familiar with life, science and technology in an educational, interactive, and entertaining way, and stimulate curiosity and critical thinking.

Committed to full interactivity and the motto, “Forbidden not to touch, not to feel, not to think”, the museum showcases an extensive diversity of seasonal exhibitions and scientific activities of all kinds, with the objective of “generating a pleasant learning process in which the visitor always takes an active part and decides where he/she would like to go and what he/she would like to know”. 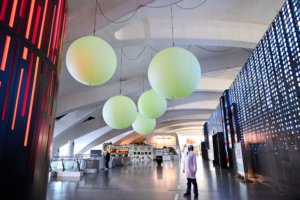 The Science Museum is part of Valencia’s Ciutat de les Arts i les Ciències (City of Arts and Sciences), which comprises five other cultural and scientific elements…

Extending over two kilometres that was formerly the River Turia bed, the complex’s striking architecture was designed by prominent Spanish architects Santiago Calatrava and Félix Candela.

Coinciding with the anniversary, the museum is presenting the “20 amb tu, contigo, with you” exhibition, a time capsule of its 20-year history highlighting significant elements that have defined the Museu de les Ciències as a benchmark in interactive science.

The exhibition is described as “a way of viewing the evolution of its history through pieces from different exhibitions that have, over the past 20 years, helped people understand scientific phenomena through experimentation and entertainment”. Visitors can also, via a computer program, configure a new time capsule that will be opened in 2040.

During November, visitors are being offered a 20 per cent discount for the museum’s special anniversary programme, including guided “infotours” and a “green light-up” of the building from 8pm.

The museum has also just premiered the musical installation “Emospheras” as part of the “Play: Science and Music” exhibition. This space offers visitors an immersive sensory experience generated by five backlit spheres suspended from the ceiling that vibrate and change colour in tune with Beethoven music. The installation was designed by the Interactive Museum of Music of Málaga (MIMMA) to commemorate the 250th anniversary of Ludwig Van Beethoven’s birth on 16 December 1770.

Another new exhibition is the “High Voltage” scientific show in the Science Theatre.

Valencia is well-connected by road to Alicante, a convenient 170-kilometre highway journey that takes a comfortable two hours for those renting a car at Alicante-Elche Airport.