One of Europe’s big-three cycling races is passing through Alicante this weekend. The 152-kilometre seventh stage of the 2021 La Vuelta – a premier date on the annual calendar for cycling fans, together with the Tour de France and Giro d’Italia – began yesterday in Gandia (in neighbouring Valencia province) and finished in Tibi’s Balcón de Alicante mountain area.

Friday’s stage was won by Australian Michael Storer (a member of the DSM team), who was presented with his trophy by the president of the Diputación de Alicante (provincial government), Carlos Mazón, accompanied by the local mayor, Jose Luis Candela. 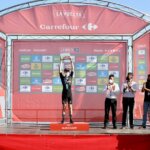 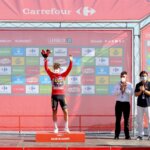 The official La Vuelta website reported that the 24-year-old climber “destroyed his breakaway companions on the steeper slopes of the gruelling unprecedented final climb of the day to take the win ahead of Carlos Verona, who couldn’t offer Movistar Team the stage win on a sad day for the Spanish team.”

Participating in his 15th La Vuelta, Alejandro Valverde was forced to abandon after a crash, while Primoz Roglic (Jumbo-Visma) retained La Roja (the leader’s jersey) just seconds ahead of Felix Grossschartner (Bora-Hansgrohe). The 182-man peloton endured six climbs and more than 3,500 metres of elevation en route to the summit finish at Balcón de Alicante.

Tourists visiting Alicante and the Costa Blanca this weekend who are unable to view the race in person can watch live action on Eurosport or Spain’s RTVE.

Sunday’s ninth stage moves to the Murcia region on Alicante’s southern border, with a mountain start at Puerto Lumbreras and the finish line in Alto de Velefique (in Almería province at the eastern end of Andalacía).