The enticing culinary experience for visitors to Spain’s popular Costa Blanca tourist resorts begins as soon as they land at Alicante-Elche Miguel Hernández Airport. Newly upgraded restaurant options at the airport terminal are, however, just a taster of the gastronomic pleasures to come.

As authorities have been highlighting during the “Gastronomic Alicante-Mediterranean Lifestyle” fair, which ends today in the capital city’s fairgrounds pavilion, “in Alicante province we have the finest products and the people who know best how to create superb cuisine”.

A diverse program of activities during the fair includes wine tastings, show-cooking presentations, culinary workshops, the national Spanish tortilla (potato-based omelette) championship, an inaugural competition for professional chefs using Elche dates in their cooking, and seminars by chefs from Michelin-star restaurants. In fact, in recent years, 12 restaurants throughout the province have accumulated a total of 16 Michelin stars. 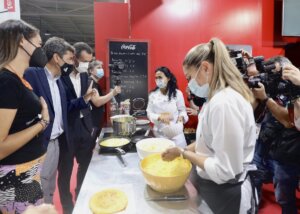 While these elite establishments are the flagships of Alicante’s gastronomy, the authorities have also been keen to stress the attractions of the province’s everyday culinary options, including both traditional cuisine and international favourites for tourists from the UK, Europe and elsewhere around the world.

They have also stressed that most health and safety restrictions have now been eased for restaurants, cafés and bars – coinciding with national full-vaccination rates rising to well over 70 and nearing 80 per cent – although caution still prevails.

For Carlos Mazón, president of the provincial government (Diputación) and tourism board, the gastronomic segment is an essential symbol of Alicante tourism. “The area’s culinary excellence has crossed borders, thanks to the quality of its products, both from the sea and from the garden, and the international recognition of many of its chefs.” 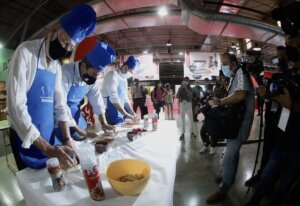