Spanish airport operator Aena has received a prestigious global award as “Best Airport Group COVID-19 Excellence”. The award was presented during the World Airport Awards, organised by airport research and audit consultancy Skytrax. The Aena network comprises 46 airports, including Alicante-Elche Miguel Hernández Airport, which last year was one of just six to be recognised with Skytrax’s highest safety rating.

Considered one of the world’s leading quality recognitions for the airport industry, the awards are based on the consultant’s satisfaction surveys of passengers at different airlines and airports around the world. Aena was rewarded for its high hygiene and safety measures, including cleanliness, signage, maintaining safety distance, the availability of hydro-alcoholic gel and mask wearing.

Aena launched its “Operational Recovery Plan” at the start of the pandemic, with more than 100 safety, hygiene and health control measures, including organisational, operational and those aimed directly at passengers.

“It is highly satisfying that users have valued so positively Aena’s ongoing effort to implement health safety measures and protocols in times as hard as the pandemic,” said chairman Maurici Lucena. “Aena’s teams have gone above and beyond to safely resume activity, and traffic data so far this year and those anticipated this summer show that it has paid off and that passengers have confidence in our facilities and, by extension, in Spain. This is because airports are the indispensable gateway to our country and many of our cities.” 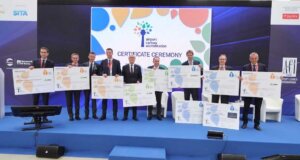 Praising the work of the Spanish airport manager, Skytrax CEO Edward Plaisted said, “We congratulate Aena for its success in earning this important recognition as the ‘World’s Best Airport Group for Excellence in COVID-19 Hygiene and Safety.’ The past two years have been extremely difficult for airports around the world. They have faced numerous COVID-19 restrictions and the major decline in travel demand. With air traffic returning to pre-pandemic levels, Aena is meeting the challenge of delivering the highest standards in quality across its airport network.”

Meanwhile, Alicante-Elche Miguel Hernández Airport has raised its Airport Carbon Accreditation to Level 2. This program establishes an accreditation system based on levels that respond to progressive commitments to reduce CO2 emissions derived from airport activity. 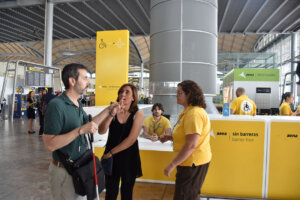 In the case of Alicante-Elche’s airport infrastructure, it officially moves from the “Inventory” to the “Reduction” level, thanks to the implementation of a management plan that includes a series of measures aimed at minimising its carbon footprint.

Nationally, carbon neutrality is a key strategic objective included in Aena’s Climate Action Plan 2021-2030, which includes initiatives to mitigate the effects of climate change. According to Aena, these initiatives will allow the operator to achieve carbon neutrality by 2026 and, along the path to achieving “net zero” by 2040, a 94 per cent reduction in emissions per passenger associated with Aena’s own operations by 2030.

Improving Accessibility for the Deafblind

In another important initiative this summer, Alicante-Elche Miguel Hernández Airport organised its first “Aena Accessibility Conference”, focusing on how to improve services and attention for people with deafblindness.

The main objective of the conference was to raise awareness among and guide airport staff in the best ways of helping people with disabilities or limitations when moving around an airport.

In pre-pandemic 2019, Alicante-Elche Miguel Hernández Airport served more than 195,460 passengers with reduced mobility (PRM). According to Aena, users gave “a very positive assessment of the quality of the PMR service, scoring 4.98 out of five in satisfaction surveys”.