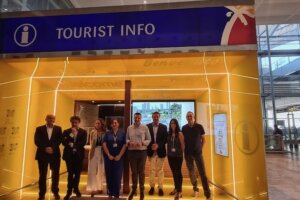 The new tourist information office at Alicante-Elche Miguel Hernández Airport has been remodelled to provide visitors with improved access and a 24-hour service.

During a visit to the upgraded airport facilities (located in the arrivals area), the regional Valencian government secretary for tourism, Francesc Colomer, said the office was a strategic front line for interaction with visitors from abroad, to provide them with information, explain the area’s history and showcase Alicante’s capacity to offer a warm welcome to tourists and encourage them to return.

Colomer added that every person entering the Valencian region through Alicante-Elche Miguel Hernández Airport would find at the new office “a meeting and welcome point with the message that they are all well received here”. He stressed the airport’s key role as an international travel hub in Valencia. Alicante is one of three provinces in the region (together with neighbouring Valencia and Castellón further to the north) and its Costa Blanca beach resorts are the most popular among UK and other European tourists.

Alicante-Elche Airport director Laura Navarro also highlighted the importance of having a Tourist Info office in the arrivals terminal, and described its provision of a 24-hour service as “a very important milestone”.

Navarro recalled that 2019 was a historic year for the airport, with 15 million passengers in total (half of them arrivals), and she noted that currently the figures had recovered to 88-90 per cent, “so we look forward to a good summer”.

For his part Carles Molina, the town hall councillor for tourism in Elche (the municipality where the airport is located), expressed his satisfaction with the new airport office, and noted that tourist information services had been further reinforced in Elche with new facilities in the town’s municipal park.

The new airport office includes a front section that has been permanently opened, allowing access to a space where tourists can receive personal or digital attention, and view audiovisual screens. The 24-hour service provides information via a touch point with general content on the Valencian region, Alicante and Elche cities, and airport services.

Meanwhile, Valencia Generalitat (regional government) president Ximo Puig has hailed as “decisive” an announcement by the national government that it has launched the first phase of an €80 million project to provide a direct rail link between Alicante-Elche Miguel Hernández Airport and Alicante city.

The project was discussed during a meeting between Puig and national minister for transport, mobility and urban agenda Raquel Sánchez.