Tourists planning an eagerly-awaited holiday in one of Alicante’s popular Costa Blanca resorts this spring and spring will be able to take advantage of a host of new flight services provided by the major airlines.

Leading leisure airline and tour operators Jet2.com and Jet2holidays have responded to “travel restrictions ending and international travel returning to normal” by adding new flight options for a range of summer sunshine destinations including Alicante.

According to the sister holiday companies, “recent polling has shown that customer confidence is at its highest point since the onset of the COVID-19 pandemic. Data revealed that seven in 10 (70 per cent) respondents to a weekly survey about travel say they feel confident about booking and travelling on holidays.”

The additional service for Alicante-Elche Miguel Hernández Airport is a Friday flight from Glasgow, operating from 29 April to 10 June.

“This return to normal,” said CEO Steve Heapy, “has led to customer confidence bouncing back strongly, with holidaymakers jumping at the chance to get away. As such, we are seeing enormous growth for all seasons, with summer 2022 proving to be one of the most popular times for a holiday.”

After a two-year hiatus, British Airways has returned to international short-haul flying from Gatwick Airport, including its Alicante-Elche Miguel Hernández Airport route.

Services are initially operating under the British Airways Air Operators Certificate (AOC), before operations will be moved to a new British Airways-branded subsidiary, BA EuroFlyer, later in the year. The new airline is operating in a similar manner to the company’s existing subsidiary BA CityFlyer.

Germany holiday carrier Condor has added summer scheduled flights to Alicante from July 31 (from Frankfurt on Wednesdays and Sundays).

Announcing the new service, the company said, “The Spanish port city of Alicante on the Costa Blanca delights with the lively old town of Barrio de la Santa Cruz, whose narrow streets and colourful houses lead to the mediaeval castle Castillo de Santa Bárbara. The castle is located on a hill and offers impressive views of the Mediterranean coast. In addition to a vibrant nightlife, vacationers will find some of the country’s most beautiful beaches along the White Coast.”

Earlier this month, Blue Air inaugurated a new route between Alicante-Elche Miguel Hernández Airport and the Romanian capital of Bucharest, with flights on Tuesdays and Saturdays. The service – provided by a 189-passenger aircraft – marks the return of the Romanian-based airline to Alicante, after ceasing operations in 2018.

The Costa Blanca airport is also connected to Romania by Wizz Air, with flights to and from Bucharest and Cluj-Napoca (in the north-western part of the country). 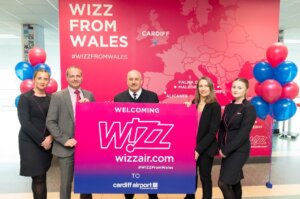 Also earlier this month, Wizz Air launched a new base at Cardiff Airport, with nine new routes to destinations including Alicante.

“This is a very exciting time for Wizz Air in the UK,” said managing director Marion Geoffroy, “as we celebrate the opening of our highly anticipated base at Cardiff Airport. By bringing our new and efficient Airbus aircraft to Cardiff, the wings of which are manufactured in Wales, we are providing a significant boost to the Welsh economy and creating jobs. The base, which is our fourth in the UK, will bring further connectivity to the region, with passengers in Wales and the South West of England now able to take advantage of our ultra-low fares to ‘fly local’ to their favourite getaways.”

Passengers on Wizz Air flights to Alicante can book tickets with the airline’s travel insurance package, which includes COVID-19 cover and WIZZ Flex. The latter allows for flights to be cancelled up to three hours before departure – “without any fee and receive 100 per cent of the fare immediately reimbursed in airline credit”.

This summer Air Nostrum is operating various routes between Morocco and Alicante. The services include new flights every Monday and Thursday to and from Nador, between 22 July and 4 September; while existing schedules link the Costa Blanca with Casablanca, Tangier and Tétouan.

Meanwhile, tourists visiting Alicante can now enjoy the lifting of face mask rules in most indoor settings, including bars, cafés, restaurants, shops and supermarkets. They will still have to be worn in hospitals, health centres and pharmacies, and for air, rail and bus transport – although not in their vicinity, for example, airport terminals.

According to minister for health Carolina Darias, the government has been able to adopt the new measures thanks to Spain’s high rates of COVID-19 vaccination and the improving epidemiological situation. She noted that 92 per cent of the population – 39 million people – had completed the full vaccination schedule, “which has resulted in rates of the illness descending and most of the country now being at a low level of risk”.

Click here for live information about flights to and from Alicante-Elche Miguel Hernández Airport.